Turn your rental home over to Alabama's real estate pros

Get a Free Rental Analysis 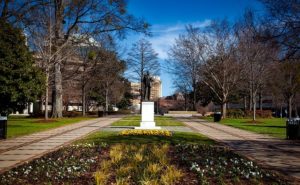 Located in the heart of Central Alabama, Birmingham is the largest city in the state. This one-of-a-kind southern jewel was formed after the Civil War, with the community quickly taking shape around the railroad. Early growth occurred so rapidly that Birmingham earned the nickname, "The Magic City," which many still use today.

Over the years, Birmingham has undergone a number of dramatic metamorphoses. From the bustling industrial development of World War II to the unforgettable scenes of the Civil Rights Movement, this vibrant city has played a key part in shaping the history of the United States.

Today, Birmingham is best known as the center of cultural and economic activity in the Yellowhammer State. Approximately 1.2 million people live in the metro area, which is also home to many multinational corporations, world-class museums and art institutions, and highly ranked universities. Some of Birmingham's notable local landmarks include destinations like the Carver Performing Arts Center, the Alabama Theatre, and the Birmingham Museum of Art. The University of Alabama at Birmingham sits downtown.

In recent years, Birmingham has undergone somewhat of a rebirth, as the local government has focused on driving new commercial growth and mixed-used development across the city. Modern Birmingham is often recognized for its exciting food scene, while the diversity of its neighborhoods and rich history easily make it one of the most intriguing destinations in the nation.

Thinking of purchasing rental homes in Birmingham? Perhaps you already own a local home and you need the right expert to help you maximize the value of your real estate investment? No matter where you find yourself, working with a professional Birmingham property management team is the simplest way to get the stress of property ownership off your shoulders.

At Signal Property Management, we provide full-service solutions for Birmingham rental owners. Our team of independent property pros understands the ups and downs of the market in Central Alabama, and we're eager to help our clients succeed. From finding the right tenants to keeping the home profitable, we handle all of your home's needs.

Explore our professional solutions for your home.

Don't find yourself stuck with a vacant property and no rental income. Our marketing experts work quickly to find qualified tenants, with online & traditional marketing tools.

You don't want just anyone in your home and we get that. We use background and financial checks, reference verifications, and public records to carefully screen every candidate.

Keep your cash flow healthy without the runaround. We handle all billing for your property, including following up on late payments & depositing your earnings in your account.

Keep your home looking its best without spending long hours chasing after maintenance tasks. We coordinate repairs with your tenants and ensure your property stays in great condition.

Experience unbeatable peace of mind with regular property inspections. We schedule visits throughout the duration of a tenant's stay & check up on what's taking place behind the scenes.

Make your next tax season a breeze. We generate monthly financial reports and carefully document your expenses and income. Check in at any time by signing into your online account.

We do everything in our power to keep bad tenants at bay, but should a relationship with a renter ever go south, we'll handle the eviction for you. Breathe easy with a professional on your side.

Don't put yourself at risk by ignoring the housing laws and ordinances that govern your rental property. Our team plays by the rules and keeps your interests protected.

Discover why our team provides the best solution for your home

Communication is Our Priority

Don't find yourself partnered with a property manager who keeps you in the dark. We work diligently to answer your questions & keep you informed on the latest in your rental property.

Powerful Technology Works for You

We've taken a giant leap into the 21st century, with online property listings, digital accounts, and digital payment options. These tools allow us to provide the best possible service.

Trusted Vendors Work with Us

Maintaining the health of every home in our portfolio is one of our chief concerns. We've built relationships with trusted vendors across Greater Birmingham to get the job done right.

We Offer the Best Customer Service

Homeowners are only one part of the property management equation; keeping tenants satisfied is equally important. By providing great support, we keep turnover rates low.

WHAT OTHERS ARE SAYING

Our Clients Love Us

"He is always quick to respond to any questions I may have! Give Mark a call for any of your property management needs."

Get a Free Rental Analysis

• See how much you could earn monthly.
• Learn how we maximize your profitability.
• Find out whether your home fits our portfolio.

GET TO KNOW US

If you own rentals in Birmingham or the surrounding suburbs, you understand the pressures of being a DIY landlord firsthand. From finding qualified tenants for your home to sending out invoices, coordinating maintenance visits, and compiling accounting records, running a successful rental home is a full-time job. Partnering with a professional property manager can ease the burden on your shoulders and ensure you get the most out of your investment.

At Signal Property Management, we aim to provide the best property management in Birmingham. We're an independent team of local real estate experts that is passionate about helping our clients to succeed. We continually monitor trends in our local market and provide ongoing recommendations and support to our clients. Whether you own a single home in Central Alabama or you need help juggling a large portfolio, we're here to help you.

Start a Conversation with Us

Learn how professional management could help you reach your full potential: (205) 831-4002